As you read this, it may be worth keeping in mind, that this woman clearly relates disagreeing with, or even not liking Islam with racism. For the umpteenth time, Islam is a political philosophy and a religion. It is not deserving of any rights and especially not the right to be liked or respected. These attitudes are earned and not earned by sending out retarded women to be detonated by remote control in order to murder unexpecting and uninvolved people, which is still going on in Iraq, in the name of Islam. Muslims are not a race and should be viewed as we would view any other group with stated violent goals of violent manifest destiny. 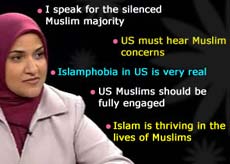 WASHINGTON – Dalia Mogahed, a hijab-clad American Muslim, has made history being the first Muslim woman appointed to a position in President Barack Obama’s administration.

She sets on a newly-formed interfaith advisory board the administration hopes will improve relations with Muslims in the US and across the globe.

In an exclusive interview, IslamOnline.net discussed with Egyptian-born Mogahed her new role, the challenges facing Muslims, Islamophobia in the US and her own success story.

– How do you feel about being the first Muslim appointed to the Obama administration?

I am not actually the first Muslim. There have been other Muslims appointed to Obama’s administration. I am also not the only Muslim on the White House advisory Council on Faith-based and Neighborhood Partnerships. I join Dr. Eboo Patel as the second Muslim on the council. I am, however, the first Muslim woman in this council. I feel very honored for the privilege to serve in this way, but also recognize the responsibility that I’ve agreed to take on. I see my role much more in terms of what needs to get done rather than a historical accomplishment. I believe the accomplishments are yet to be fulfilled.

– What is the role of the Council on Faith-based and Neighborhood Partnership?

I am a member of a 25-person advisory council to the White House focused on offering solutions for societal problems sourced in the wisdom of faith communities. More specifically, I am on the Inter-religious Dialogue and Cooperation Task Force, a group of only 5. We will work on recommendations for our area of focus and these will be reviewed by the larger council and then included in an annual report with recommendations from the council to the President.

– What is your role as an advisor on Islam?

I would not say I am an advisor on Islam. I would say that it is my role to convey the facts about what Muslims think and feel. I see my role as offering the voices of the silenced majority of Muslims in America and around the world to the council so that our deliberations are informed by their ideas and wisdom. I believe that I was chosen because the administration cares about what Muslims think and wants to listen.

– What kind of advise would you be giving Obama to improve relations with US Muslims and the Muslim world?

I would advise him to listen first and foremost. Many have claimed that terrorists have ‘hijacked Islam’. I disagree. I think Islam is safe and thriving in the lives of Muslims around the world. What the terrorists have been allowed to take over are Muslim grievances. Muslim concerns over injustice have been largely dismissed by the previous administration leaving a vacuum exploited by extremists. This is a dangerous reality for all of us. Instead, the US must hear mainstream Muslim concerns even if America does not agree with their perceptions. These issues can no longer be ignored or left and the extremists to monopolize.

– What areas of domestic and foreign policies you think the administration should be introducing change in?

I would endorse the action plan outlined in the report “Changing Course” which recommends four areas of action: Respect, Reform (political and economic) and Resolution of conflict. When it comes to the US, I would recommend that a senior member of the administration go on a “listening tour” of the US and hear what Muslim Americans are concerned over. Like all Americans, they are worried about the economic crisis, their financial future and jobs. And like many other US citizens, Muslim Americans are also worried about racial profiling, discriminatory immigration policy and the erosion of civil liberties.

– What do you think of the rising Islamphobia in America?

Islamphobia in America is very real. Gallup finds that Muslims are among the most unfavorably viewed groups in the US and only a little over a third of Americans say they have no prejudice against Muslims. This presents a grave danger to America as a whole. The disease of racism, by definition, is a bias in judgment. This means that racism clouds sound judgment and leads people to make irrational decisions. It also divides a nation and prevents the full utilization of its intellectual and cultural resources. Racism is wasteful. Racism is a strategic disadvantage. I am very proud of the progress America has made in fighting this problem as it relates to the relationship between blacks and whites. In 1956 only 4% of Americans approved of a marriage between whites and blacks. The marriage that produced our president was illegal in Virginia when he was born. Today 80% of Americans approve of marriage between blacks and whites. Last year, Barack Obama became the first Democratic Presidential candidate in decades to carry Virginia. We are a stronger and smarter nation because of this growth. Our next growth spurt will be in ridding our society of anti-Muslim prejudice.

– What do you think US Muslims themselves need to do?

Muslim Americans lag behind other Americans in their political and civic participation according to our research (National Portrait). The best thing they can do to strengthen America is to become fully engaged in writing its next chapter by getting involved and feeling a strong sense of ownership for the future of their country.

– What are you hopes and aspirations for US Muslims?

I hope that they enrich America by becoming fully engaged in its growth and development, as well as its struggles.

– Tell us about your own journey of success as an American Muslim woman, with hijab. What challenges have you faced along the way?

I have been tremendously blessed, Alhamdulillah. I feel that mine is a uniquely American story. I grew up in an educated middle class home, but with no special connections or privilege. By excelling in school, I was able to attend a top university and helped pay my way by working during the summer as an engineering intern. My summer job was at a paper factory in a small Wisconsin town. I was only 19 years old. Managing technicians often reminded me that they’ve been working on the machine longer than I’ve been on Earth. Many also told me that I was the first Muslim they’d ever met. Very few women worked in the factory, so I was already a minority just as a female, but I was also the only hijab-wearing woman in the entire town and the only Muslim in the factory. All of this of course presented a challenge, but one that taught me a great deal. Once people got to know me I became a professional to them, not a woman in hijab. I took this experience with me to my permanent job after college and to my graduate work. These situations taught me that living according to your conscience was more important than comfortably conforming to your surroundings. I think this simple lesson of life is one that has helped me succeed and given me the courage to face the most difficult and daunting situations.