A Muslim-owned jewellery shop has decided to ban customers wearing veils after being targeted by robbers disguised as Islamic women. Telegraph.UK 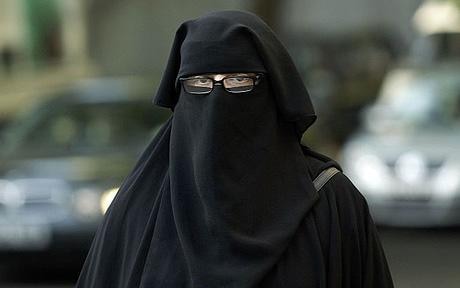 Muslim women in a niqab will be encouraged to telephone in advance to ensure that a female member of staff is present during their visit, to confirm their identities Photo: HEATHCLIFF O’MALLEY

Everyone entering ATAA Jewellers in Glasgow must reveal their faces under planned new rules to protect staff from further attacks.

The store owners decided to act after two Asian men wearing traditional Muslim women’s clothes – including niqab veils – made away with thousands of pounds worth of jewellery earlier this month.

The pair, who were also carrying handbags, pretended to be interested in buying some items but attacked staff with pepper spray when cabinets were unlocked.

Now the Sadiq family who run the shop are planning to put up a sign informing customers that they cannot wear any headgear that covers the face.

Any Muslim women who are more comfortable in a niqab will be encouraged to telephone in advance to ensure that a female member of staff is present during their visit, to confirm their identities.

“It is our safety that matters as well at the end of the day,” Rukhsana Sadiq told the BBC Asian Network. “God forbid anything like this happening to anyone else.”

The family said they accepted the policy may offend some Muslims, but expect other businesses to take a similar approach. Criminals wearing Islamic veils have carried out at least one other robbery in the city.

Local councillor Hanzala Malik backed the plan. “I know in Scotland that banks will not allow their customers coming in with motorbike helmets, I don’t see why it should be different for people wearing the Niqab. It is an issue about identifying people,” he said.

The disguise potential of traditional Muslim women’s dress has been exploited several times in recent years. July 21 bomber Yassin Omar donned a burka as he fled after the failed attacks, as did BBC journalist John Simpson to gain entry to Afghanistan during the 2001 invasion.