When I started this blog, my intention was to follow basically two issues. Global warming and all the hysteria around it and the growth and threat of Radical Islam. I rarely post on global warming at this point because for one thing, the threat of radical Islam to western civilization and for that matter civilization in general is real imminent and may destroy all we believe in and even secular history as we see in Islamic nations where any non Islamic artifact is destroyed and all records of it with it. Meanwhile, global warming even if true would be a good thing for civilization as it always has been in the past when warmer periods meant more growth exploration and new technologies and architecture etc. Also, it seems to me anyone still believeing in global warming is likely too stupid to ever get the facts no matter how often they are presented to them. I have posted countless lectures here on Vlad by some of the worlds leading actual climate scientists who explain clearly how not only are the therories of anthropogienic global warming utter nonsense but the models used consoistently fail to predict results at all levels. However, a few articles have crossed my desk in the past few days so I thought I would post them. All I can say is, damn I wish it was true. The warmer it is (to a point obviously) the less exoneive it is to live. Less energy required not to freeze to death and a surplus of food means cheaper and more diverse food stuffs. Sadly with the stalling of the sun spot cycle it appears the earth is cooling and this may bring real problems.

First, from one of my favorite blogs Klien Verzet, a graph showing predictions by global warming alarmists and the reality of CO2 and tempratures: Here is the graph but click the link for the whole story. 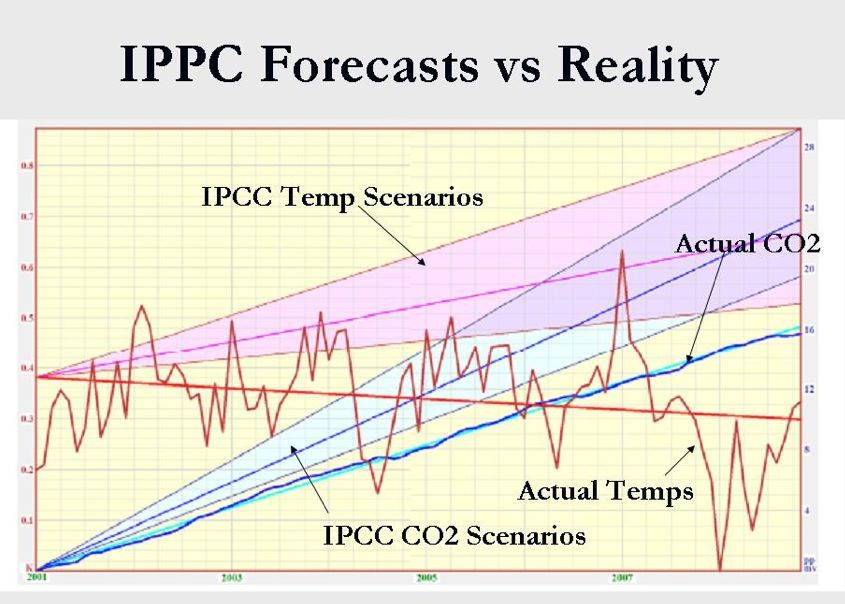 As the good people at Klien Verzet say, why are these people not tarred and feathered?

My vote for the first person to be run out of the country on a rail, is David Suzuki who openly lies about global warming in order to make people concerned about it. He knowingly confuses pollution with CO2. See video below. Suzuki demonstrates how ready he is to lie for his agenda.

See this article in the Toronto Sun for an excellent explanation on the disengenious tactics and nature of the global warming crowd. By the way, I am not nor have I ever taken one dime to the fossil fuel industry even thoug Suzuki uses the extraordinarily bad logic of claiming all his detractors do. I loath fossil fuels because I want to stop financing Muslim terrorism. That’s enough reason.

Remember, David Suzuki is the man who walks off stage if anyone in the audience at one of his fear fests actually asks a scientific question about global warming that may cause doubt and openly recommended that anyone who denied anthropogenic global warming should go to jail.