Conservative Chris Reid sent out a call for help today, when a moderator of the Ontario Progressive Conservative facebook group decided to publicly tell him that he needed to change his profile picture or he would be banned from the group.

Yes, for some reason Ryan Rantz has decided that he needs to police the profile pictures of the 740 members of the facebook group, less someone find something “offensive.”

Alright this is getting ridiculous. I just received a public reply from Ryan Rantz, the moderator of the Ontario PC and CPC supporter facebook group pages, demanding I change my profile picture within 1 day, or I will be banned from the groups.

“ok chris i’m going to be as polite as possible but your profile picture has to go if you want to continue participating in the conservative facebook groups and think common sence should indicate my reasons . its simply not approiate and some users may find it threatening or offensive . i’m giving you 1 warning and 1 day to replace it with something else .” http://www.facebook.com/topic.php?uid=2204951796&topic=17641

I’m asking everyone if they could support me in avoiding being banned by replacing your picture for a day with a gun, and posting on the Ontario PC Party facebook group page how ridiculous this is to try to censor people’s profile pictures, especially when a gun is a constitutional right and a completely lawful object.

No doubt you will all find this quite incredibly absurd. 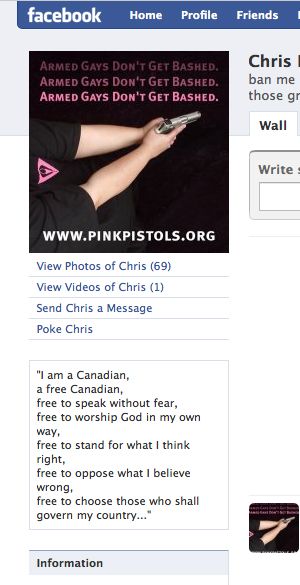 For some reason Ryan Rantz thinks that common “sence” alone should indicate his reasons for requiring Chris Reid change his profile picture. Common sense? Is it guns you have a problem with Ryan, or is it gays? Or is it gays with guns?

It should be kept in mind that Chris Reid was actually a candidate for the Conservative Party for the 2008 federal elections. He resigned his candidacy because of comments made on his blog about the castrated effeminate state of Canadian culture, and how a certain brutal and infamous crime on a Grey Hound bus could have been averted if Canadians were allowed to carry hand-guns.

The quote below Mr. Reid’s profile picture is an important one. It is a quote from the Canadian Bill of Rights, created by Conservative Prime Minister John Deifenbaker in 1960. Since then, Trudeau’s Liberal party has come up with a watered down version that has been the subject of some turmoil, as it enshrines no property rights, and has empowered the Human Rights Commissions that we all know and love to hate.

So what right does Ryan Rantz have to tell Chris Reid he needs to change his profile picture, in order to remain a member of a Facebook group for a political party he was once a candidate for? Unfortunately, every right. But that doesn’t make it just. 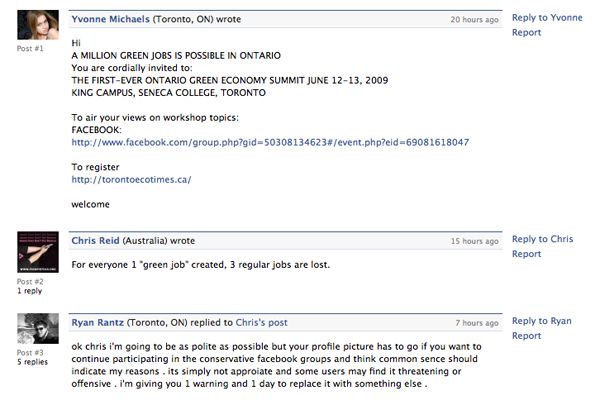