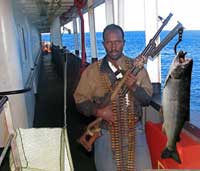 from the Canada Free Press

Even before the rescue of Captain Phillips, the press was already hard at work doing what they always do, spinning the Muslim perpetrators of the attack into its victims. The current story that is beginning to rise through the bowels of the mainstream media is that the pirates are actually volunteer fisherman who have banded together to stop toxic dumping and fishing by foreign vessels.

That’s right the Somali pirates are actually misunderstood environmentalists. And once again Westerners are to blame for causing the poor Muslims to attack them.

Al Jazeera seems to have taken the lead in pushing the “environmentalist pirates” angle, naturally it then percolated through the usual “hate America” channels such as Prison Planet and Democratic Underground, and is slowly bubbling through into mainstream news stories on Somali piracy.

This of course is typical of how Muslim attackers become the victims. The first step is to portray the Muslim attackers as responding or retaliating to crimes committed against them by “colonial” powers. If that direct approach fails, Plan B involves blaming the whole thing on poverty, and “solving the problem” with aid and some “peace talks” with the more violent factions, who will then naturally play key roles in the new government.

Nowhere in the mainstream press however will you find stories on how the pirates see themselves as following Muslim law– the precedent having been set by Mohammed’s banditry, leading his gang of Muslims\Thugs on raids against caravans and local tribes. Rare is the mention that the pirates are even Muslims. It wouldn’t do to tarnish the otherwise sterling image of the Religion of Peace.

But the overall thrust of the Somali piracy story has always been to argue how wrong the Bush Administration was in backing the overthrow of the ICU, the Islamic Courts Union, an Al Queda linked local version of the Taliban.

The ICU had formed as a stealth network of Sharia courts that took advantage of the local political chaos to seize power, with backing from Eritrea. The result was a brutal Islamist state that beheaded men for watching soccer tournaments and treated women much as you would expect. They shut down schools and recruited thousands of child soldiers into their armies. And the media applauded them for bringing “stability” to Somalia.

Not satisfied with turning Somalia into an Islamist tyranny, the ICU also announced plans to seize parts of Kenya and Ethiopia inhabited by Muslim minorities in order to create a supra-Islamist state.

Ethiopia naturally saw the writing on the wall and realized that if it didn’t fight the ICU in Somalia, they would be fighting them at home and intervened. The ICU’s terrorists and child soldiers scattered like rats, some of them already equipped with weapons and ties to the local Sharia courts, went into the piracy business.

The media’s response to Ethiopia’s invasion ranged anywhere from skeptical to outright hostile… particularly since the Bush Administration backed the move and carried out targeted strikes against some ICU leaders who were also members of Al Queda. Ever since then the media has repeatedly bemoaned the loss of “stability” brought to Somalia by the ICU.

The ICU has lost direct military control over Somalia, but its former leader has won Somalia’s Presidential election and its government is packed with former ICU leaders. Meanwhile the Arab League has brokered a move to legitimize Hizbul Islam led by Sheikh Hassan Dahir Aweys, with close ties to Al Queda. Slowly behind the scenes, the Islamist’s goal for Somalia and all of Africa is back on track.

Iran and Eritrea backed and trained ICU terrorists and insurgents as part of the larger goal of an Islamic Africa. Yet the media has repeatedly hailed the ICU for bringing stability to Somalia, while repeatedly attacking Ethiopia’s government for suppressing dissent. The difference? Ethiopia is Christian and Somalia and Eritrea are Muslim. So we’re now seeing a push to force Ethiopia into making territorial concessions to Eritrea, despite Eritrea’s longstanding support and training for Islamist terrorists.

And when it comes to the pirate gangs, many of whom are former or current ICU fighters, the new “cycle of violence” narrative is already taking root in the press. Clearly of course America has begun a cycle of violence by shooting the non-violent environmentalist pirates. And the Islamist criminals are once again the real victims.

It’s only a matter of time until the peace negotiations begin.

3 Replies to “How Muslim Attackers Once Again Become the Victims”