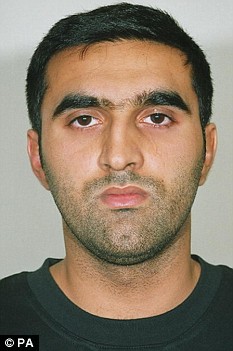 Terrorist: Omar Khyam is being held at the jail for leading a gang that planned to blow up a nightclub and a shopping centre. It is unclear whether he was one of the nine inmates who planned to escape in a hijacked helicopter

A plot by Al Qaeda terrorists to escape from a British jail in a hijacked helicopter has been foiled.

Nine Muslim inmates planned to kidnap the jail imam during prayers with weapons hidden in the mosque at Full Sutton prison in East Yorkshire.

Their plan was to then use the imam as a human shield as they made their way to the jail’s sports field.

Once there, accomplices from the outside were to pick them up in a helicopter hijacked at gunpoint after being hired for ‘business’.

Acting on a tip-off, wardens at the jail swooped on the inmates hours before the escape attempt was due to begin on Friday.

The nine men – who included convicted terrorists – were immediately segregated from other inmates and will now be transferred to different prisons.

The jail’s imam is not believed to have been involved in the plot.

One high-profile terrorist being held at the jail is Omar Khyam, who was sentenced to a minimum of 20 years in 2007 for leading a gang that planned to blow up London’s Ministry Of Sound nightclub and Bluewater Shopping Centre in Kent.

‘The intelligence was very strong and from a good source,’ an insider told The Sun. ‘It had to be acted on immediately.

‘It involved some of the most dangerous Al Qaeda terrorists in jail, all of whom are a massive threat. 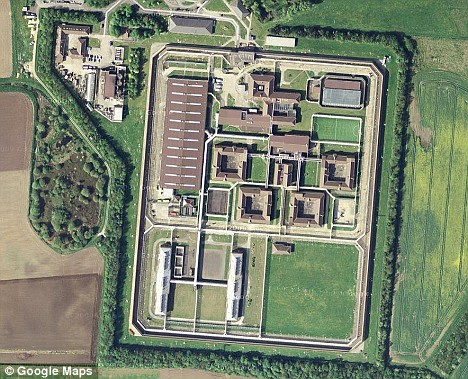 Full Sutton prison: Accomplices on the outside plotted to pick up the nine Muslim inmates in a helicopter hijacked at gunpoint 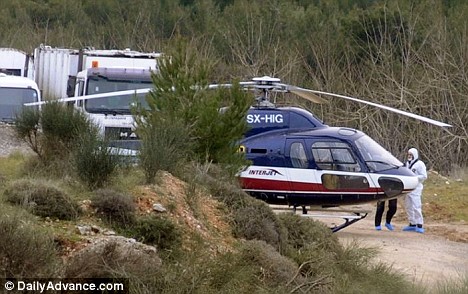 A chartered helicopter was used to spring criminal Vassilis Paleokostas from a Greek jail. It was abandoned nearby

‘It had been planned for months and the use of a helicopter shows it was sophisticated.’

The nine may have been inspired by the February escape of notorious Greek criminal Vassilis Paleokostas, who escaped with another man from a high security prison near Athens.

Accomplices hijacked a helicopter and picked up the pair by dropping a rope ladder into the prison’s exercise yard.

It was the second time Paleokostas had escaped from jailed in such a fashion.

‘The prisoners involved were immediately separated and the Prison Service is investigating the matter.’

Full Sutton is a maximum security prison which houses more than 600 men, including many lifers. 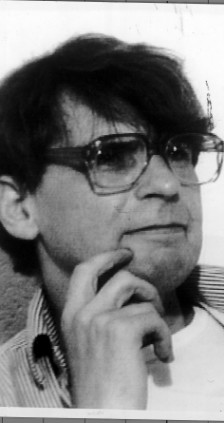 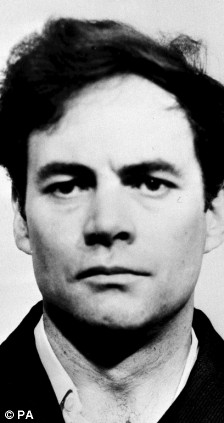 There are more than 100 convicted terrorists and suspects on remand in British prisons.

The only successful prison break using a helicopter in the UK was more than 20 years ago when two inmates – murderer Sidney Draper and robber John Kendall – were sprung from Gartree Prison, in Leicestershire.

Kendall, an East London gangland boss, was serving eight years for burglary while Draper had been jailed for life for murder and theft.

Kendall was recaptured ten days later, but Draper remained on the run for another 13 months.

In January 2000, he secretly travelled to Pakistan, after telling his mother he was going to France.  Once there, he attended a mujahideen training camp.

During his 2007 trial, he was asked what he learned in the camp. Khyam told the court: ‘Everything I needed for guerrilla warfare in Kashmir: AK-47s, pistols, RPGs [rocket-propelled grenades], sniper rifles, climbing and crawling techniques, reconnaissance and light machine guns.’

He was sent home after being discovered by Pakistan’s military intelligence service, but he returned to the country in 2001 and travelled to Afghanistan to meet the Taliban.

After 9/11, Khyam took out a £16,000 bank loan and flew to Pakistan again. Once there, he met Abdul Hadi, a senior figure in Al-Qaeda and offered his services.
Killers: July 7 bombers Mohammad Sidique Khan (right) and Shehzad Tanweer (second left) with Al Qaeda plotter Omar Khyam

He helped to organise a paramilitary training camp, attended by a number of men from the UK, and talked seriously of operations in Britain.

It was this training, that helped him form the plan to bomb Britain. He bought fertiliser and stored it. Aluminium powder, a key element, was hidden in the family home.

A detonator had been discussed and designed. Plane tickets for Pakistan had been booked.
But the security services, who had already switched the fertiliser for an inert substance, did not take the risk of losing the conspirators and arrested Khyam and his gang.