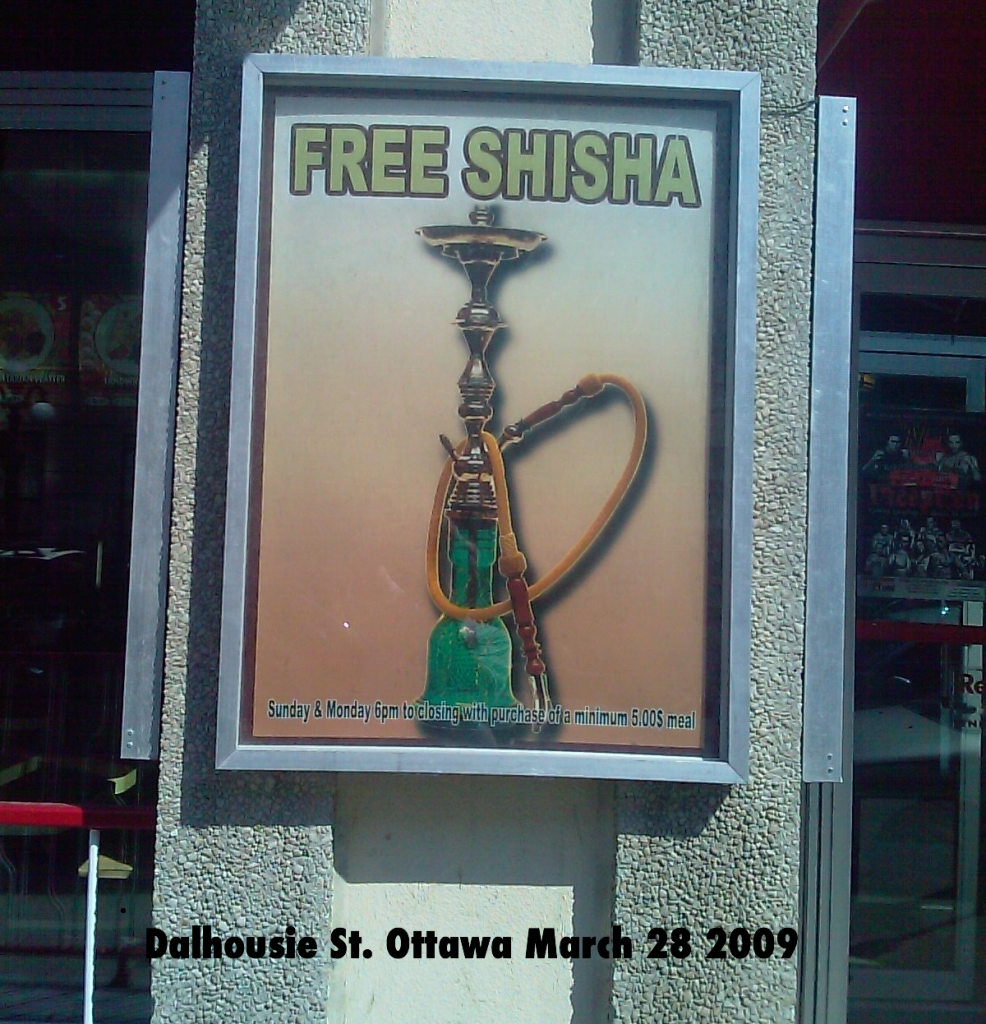 This continues to puzzle me. OK not really I totally get it. Laws are for regular born secular Canadians only and anyone from a desert backwater with no actual water gets to make up their own rules in flagrant violation of the law with total impunity. The anti smoking laws in Ottawa are so draconian that if you own a bar, and close it for a party to which people are invited, they will send police if they get a whiff of it to the parking lot and raid the place if someone has a cigarette. The fine to the bar will not be trivial. I’m serious. I know. I was asked to attend such a party. They enforce the non smoking laws way beyond the letter of the law. Why? Because they wrote the law to appear somewhat rational but enforce it for the true agenda of eliminating smoking. Yet oddly, if you have a restaurant that is owned and operated by someone from an Arab culture, then not only can you smoke at it, you can smoke indoors.

So I saw the sign you see above on a very busy street in Ottawa’s fashionable market area which teems with people good weather or bad and went in and asked about it. You can rent the hookah for ten dollars and the actual Shisha is free or, you can buy a box of Shisha for home use for $10.00 in any case, you pay ten bucks you get to break all the smoking bylaws with total impunity. I might add, that to sell tobacco products in Ontario, the province where Ottawa unhappily finds itself, requires hard to get licenses, high fees, strict regulations, and special displays which, well do not display. The cabinets your tobacco products are in must be not labeled or have any indication that tobacco is in them at all. yet you can just buy this stuff at any one of these place. Right over the counter. No ID. No nothing. Well you do need ten dollars.

My questions started to alarm the owner/operator however and when I asked if this was tobacco he answered “No. This is Organic” to which I replied, “Tobacco is organic this is just flavored tobacco is it not”

“No. Not tobacco. This orrrganic” I presume he rolled his R to emphasize the organic nature of it.

Somehow he felt if this shisha shit isn’t called tobacco then it would be OK. I dare anyone to go into a bar and light say, a crayon on fire and start smoking it. Or dried turnips. Then see how long till the bylaw enforcement officers get there or more likely the police if you refused to leave when the owner inevitably forces you too. But to be clear, a day earlier I went into a head shop on a nearby street to this Shawarama Shisha shop which had hookah’s in the window and asked what shisha is.

“It’s flavored tobacco” She answered sweetly. Original research is a good idea so we do not have to rely on this:

Shisha is tobacco that has been mixed with molasses and flavoured. Fruit-flavoured shisha is most popular, but other flavors include coffee, cola and Earl Grey.

Shisha is smoked out of a water pipe, usually called a hookah. The shisha is placed in a small bowl at the top of the hookah and burned using a small coal on top of aluminum foil or similar sort of material covering the shisha. The bowl containing the shisha has holes in the bottom allowing the smoke to travel down the body and into a water-filled chamber at the base of the hookah. The water cools and adds moisture to the smoke before it’s sucked out through a connecting hose by the person smoking.

So once again, just in case anyone is not aware of this…

Laws are only for ‘The Stupid White Man’.

The idea is, that the social engineers ever trying to justify their bloated budgets and vent their sanctimony on us, will regulate all the fun out of life till your baby is in a full Hannibal Lechter restraint suit facing backwards in the back seat of the car strapped in to a plastic bucket so that the safety air bag won’t kill him in case you hit something. Unless of course, you are an immigrant with no job or working knowledge of the local language. Then you have your brood loose in your government paid for Dodge Caravan. And of course, you can smoke in an Arab business because after all,

That… Is their ‘culture’