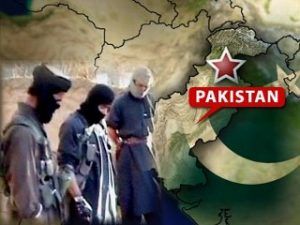 From Sky News-Alex Crawford, in Kashmir

Pakistan has monitored more than 20 Britons believed to have spent time with radical militant groups and then returned to the UK, Sky News has learned.

The tracked men are said to have trained with extremist outfits linked to al Qaeda and the Taliban and are thought to pose a potential threat to British security.

The dossier of names is expected to be handed over to British anti-terrorist teams soon and is being seen as a big leap forward in the sharing of intelligence between the two countries.

But British authorities may wonder why the names were not handed over before the suspects re-entered the UK.

The details have been compiled by Pakistan’s intelligence service – the ISI – and follow the Prime Minister Gordon Brown’s declaration that three-quarters of all serious terror plots in Britain have their roots in Pakistan.

The suspects are aged between 17 and 23 and have apparently created “sufficient suspicion” with their activities for the ISI to believe they pose a “potential danger” to Britain.

At least four are thought to have been fighting in Afghanistan – which means they may well have been attacking British troops there.

Intelligence officials say they have also heard “English accents” while listening to satellite and mobile phone chatter between the UK and Pakistan’s tribal heartlands.

Eleven of the Britons claimed they were studying in Pakistan while seven said they were visiting relatives.

One said he was working for a charity with links to Britain and others said they were on holiday.

The Prime Minister – who visited Pakistan and India in the wake of the Mumbai attacks – has already told Pakistan’s President Asif Zardari he needs to do more to crackdown on terror camps.

One anti-terror expert told Sky News: “The ISI have never been happy about sharing information. They are pretty much a law unto themselves but we’d certainly like more intelligence sharing.”

Another Pakistani source said: “We know the number of British Pakistanis engaged in what we would call suspicious activities is much higher – probably in the hundreds – but, to be frank, this isn’t a Pakistani priority.

“The intelligence services here have much bigger things to worry about and these guys haven’t committed any crime on Pakistani soil.”

Britain has already pledged millions of pounds to Pakistan to try to help fight terrorism, including some money to be specifically spent on education and attempting to de-radicalise young people.

In Mirpur, Kashmir, where most British Pakistanis are from, the local radio station Rose FM is planning simultaneous broadcasts with a local private radio station in Bradford.

Kashmir attracts hordes of British Pakistanis who visit the area every year because of family connections.

It is the one cause which unites most Pakistanis and the area is rich with militant groups – more than 25 operate there in an area which is the same size as the West Midlands.

Anyone who feels inclined could easily link up with radical groups, join their terror training camps and then export their new-found skills back to the UK.

Amir Rana, of the Pakistan Institute of Peace Studies, said: “You have to be aware of the mindset here. Most of these groups have huge public support and therefore government support.

“They exist to fight India and have political wings attached to their military wings.

“Many of them are supported by the intelligence agencies, so they are very much tolerated here.

“They are not seen as a threat to Pakistan and they view themselves as legitimate.”