From The Santa Cruz Sentinal: 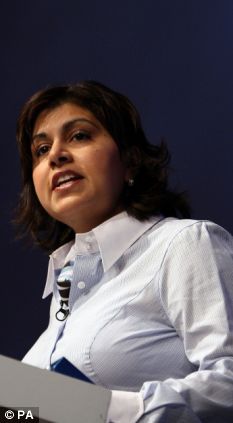 Baroness Warsi has warned that politicians have failed to tackle the problem of polygamy because of ‘cultural sensitivity’
Recently in my part of California, an immigrant fieldworker, Marcelino de Jesus Martinez, sold his teenage daughter to a man in marriage in exchange for $16,000, 100 cases of beer, 100 cases of meat, and a case of Gatorade. He went to the police to get his daughter back when the “husband” did not pay up. He thought he had done nothing wrong; people did this in his home village. The public and legal response was immediate and unsympathetic. In the U.S., we do not let “multiculturalism” trump American law and values. But this is not true everywhere.

England, from whom we derived our religious and political values, concepts of liberty, justice, and equality under the law, has lost its way. Today’s England is a multicultural mess, whose basic values are being challenged by its largest immigrant community, migrants from the Muslim world mainly Somalia, India, Pakistan and Bangladesh. The challenges are coming from polygamists who not only want the British justice system to permit them to practice, but also expect it to pay welfare to them, their many wives, and hordes of children. The British courts have become gutless supporters of multicultural tolerance — which is finally stirring up public wrath.

How is this done?

A man seeks sanctuary or immigration rights. He brings a wife and then divorces her a sham divorce so that he can bring a younger wife or wives from his native land. There are thousands of these cases.

The wives generally speak no English, are not permitted out of the house, and have nowhere to turn when the polygamy begins. Add to this the threat of beatings or “honor killing” if a wife goes public and “shames” the family.

Men claim that Islam permits them to have up to four wives, provided they are treated equally. For some, this means separate apartments for each wife and her children, of course paid for by state welfare money.

When the issue goes to court, surplus wives being faced with deportation, the men claim that they are only doing what their religion permits and that British law should respect that. Some judges appear weak-kneed enough to buy this.

Other government departments apparently collude in this too. This from the Daily Mail, Sue Reed, Feb. 24: “A recent review by four Government departments — the Treasury, the Work and Pensions Department, the Inland Revenue and the Home Office — has concluded that 1,000 men in the United Kingdom are now polygamists, although some say the figure is higher.”

What is more, the review found, a Muslim man can claim state support of more than 10,000 pounds a year to keep his wives, if the wedding took place in one of those countries where polygamy is commonplace, such as Bangladesh, Pakistan, India, Saudi Arabia and across huge tracts of Africa.

At a time of financial crunch, note what a polygamist can get from the state: more generous housing benefits and bigger council houses to reflect the large size of his family. He is also able to claim 1,000 a year in child benefit for each of his growing brood.

The “growing brood” should also alarm the British, who at this rate would find themselves well outnumbered. Is this desirable? The Taxpayers’ Alliance, a lobby group, has complained: “Polygamy is not officially condoned here, so why should British taxpayers have to pay for extra benefits for men to have two, three or four wives?’ ”

One National Health Service nurse said this was now commonplace. He knew of a Bangladeshi-born male patient with two wives and 13 children aged between 3 months and 15 years.

Finally, let’s hear from a British intellectual. A leading Muslim academic at Cambridge University has claimed that men are biologically designed to desire more than one woman and that, therefore, polygamy should be legalized.

Laina Farhat-Holzman is a historian, lecturer, and author. Contact her at [email protected] or globalthink.net.

Leave a Reply to THE LATINO PATRIOT Cancel reply