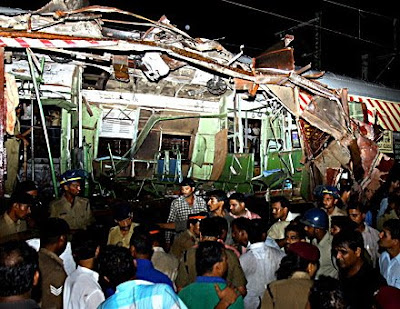 The media likes to ignore the Islamic character of Mumbai attack.

Mumbai is still burning, but the pundits and self confessed experts are arguing on TV if this is an attack by Al’Qaeda, the ISI or the Deccan Mujahideen.

But who looks at [the details of] this gruesome attack sees the contours of something bigger. According to [the Belgium] newspaper de Standaard the non-Muslims were separated from the Muslims in Hotel Oberoi. Only the kafir were shot down. In this city of millions the perpetrators directly went to a tiny Jewish center. There they, according to the Indian website Rediff News, gruesomely tortured the Jewish people before they were killed. [Also] are there many indications that the terrorist were looking for Western people, they wanted to kill them, if possible by the thousands. The only surviving terrorist now says he did a good job.

All the talk, about which organization is responsible, misses the main point: the ideology [that drives these terrorists]. It gives us the impression that if only we could stop or obstruct a certain organization, we can solve this problem. But this ignores [the fact that] jihadist constantly attack India and other countries.

Progressive Western media rather embrace meaningless terms like ‘liberation movements’ and try to ignore the Islamic character of this terror as much as possible. They rather be political correct than that they might offend somebody.

India is [just] one of the countries on the fault line of the Jihad. In ‘The Clash of Civilizations’ Samuel Huntington claims that the Islam has bloody borders: Israel, Sudan (Darfur), Kosovo, Indonesia (Aceh), Thailand and the Philippines. Where Islam is in direct contact with other civilizations, there is a constant source of tensions and often war. This is also the case in Europe. [In] a Europe that is fast Islamizing. What happened yesterday in Mumbai can happen tomorrow in Amsterdam.

Within Islamic ideology the Koran is the direct voice of Allah, thus its text is considered literally valid for all Muslims at all times. In Soera 2:191: ‘And slay them wherever ye find them’, and in many other verses Muslims are ordered to kill non-Muslims (3:141, 4:91, 5:33, etc.). The Second problem is the character of Muhammad, who [in mainstream Islamic theology] is considered a perfect human and above any criticism for his followers. Although Mohammad was anything but a perfect human: he was a general who barbarically exterminated a whole Jewish tribe who opposed him.

Islam [also] preaches fundamental inequality between humans. Non-Muslims are kaffirs and are inferior. And the Islamic ideology strives for world domination. The jihad is mandatory for all Muslims. The main goals are implementing sharia and [restoration of] the kalifat. To reach those goals, violence, cheating and lying against non-Muslim is allowed.

Dhimmi pundits try to make us believe that the text and instructions from the 7th century have no relevance for 2008. Stubbornly they keep trying to compare Islam with other religions who [they say] also had their dark sides [in the past]. But for today’s Muslims the texts in the Koran are still 100% valid and a guide for their actions.

Research at the university of Maryland in 2007 showed that 79% of the Pakistani, 76% of the Moroccans and 74% of the Egyptians agrees with the statement that strict sharia laws should rule all Islamic countries. Also 74% of the Pakistani, 71% of the Morocans and 67% of the Egyptians supports the return of the caliphate. [And] in The Netherlands many Morocans agreed with the killing of Theo van Gogh and consider [the killer] Mohammed B. a martyr. This gives an indication of [the magnitude] of the problem.

It’s not really that relevant to what terrorist group the terrorist belonged that are responsible for the killings of inocent civilians in Mumbai. These are not bureacrats who wait for orders from the NGO headoffice. The only thing [they] need is the text of the Koran and the hadith: the tradition about the life of Muhammed. The terrorists ‘just’ practice this idiology. Many others will going to do the same, also in Europe and in The Netherlands. This will continue until we see what’s the real problem: Islam.

The government response came the next day in an interview with the anti terrorism tsar Joustra, see other Kleinverzet story here: “Terror threat in Holland higher than ever“.